Since the end of August we are crusing with the van through France and Spain. So far everything works fine. In Spain it is hard to find fast charging spots though. The best options are Renault Z.E. spots which can be found in bigger cities. But it needs a lot of discussion before one is actually allowed to plug in! But if you are not in a hurry, every camping provides you with a charging socket of 230V, 6-12A. As mentioned before we planned to charge our T3 with a Type 2 CCS (combined charging system) inlet. So far we just charged the van through an industrial plug of type CEE32 400V, which was ‘hanging out’ of the back of the car somewhere… It was very inconvenient to plug in and out and it was only a temporary solution.
Hence I had to create a mechanical fixture somewhere in the car and also design a cover which would protect the inlet from rain and dirt. After trying out some options (Marc event went to cut out some gas inlet lids of old cars), I decided to use the original gasoline inlet. There it was possible to have a very nice integration and to prevent the original look and feel of the Volkswagen design. A door-like piece was drawn in CAD which was then printed by a friend on the 3D printer with ABS plastic. The whole thing was printed in one piece and it can not be disassembled. It was designed that we could integrate a push-to-open thing from a kitchen cupboard. Marc organised new tires which were kindly given to us from Continental and also a Type 2 Combined Charging inlet we got from Phoenix Contact. It had to be a special version, because no cars yet exist on the market which carry a 22kW on-board charged AND are able to perform DC charging by DIN70121. From the company Auronik we got a control board EVAcharge which will do the powerline communication to the EVSE when DC charging. For now, the DC charging is not implemented yet, but everything is prepared.

Looooong time no see! Well, a lot of things happened in the meantime, sorry for not keeping you up to date. In April, the last works were completed and in May we had to present our work to the vehicle inspection guys to get a license plate and the official permission to cruise on the streets. Luckily the guys at the office were not very much interested in the whole electrification thing, so the check was completed in about half an hour. We just had to demonstrate things like working windshield wipers and correct speed display in the dashboard! Ah and there was this discussion about the motor power. It is a bit difficult with electric motors, because they have a nominal power and a peak power rating. The peak power is what they can deliver for a short time, e.g. up to maybe 30s, before the thermal limits are reached. As originally our van had 54kW, it was just allowed to get an increase of maximum 10%, which would be 59.4kW. The nominal power of the motor is 57kW which suits just fine. And because the original gearbox is said to be not very robust, we also limited the peak power of the drive to about this value.

One thing though is a bit a pity: The empty weight of the car increased to 2100kg due to the electrification. This means it is now only a 5 seater.

From then on I could go officially on test rides on the roads and make a lot of tuning of the control software. There were things to adjust like ramping of torque commands, sequence of turning on and off of the different devices when driving. But by far the most work was to setup the proper communication between charger and battery management. The big issue here was to figure out the best way the two devices should work with eachother. But with some trying and testing I found a well-working solution.

At the beginning of the year Marc and Carla were here and we made huge progress. Carla painted all of the steel parts that support the power electronics, Marc worked on the gas pedal mechanics and I finished the wiring of the thick cables at the power distribution unit. And finally I did the Mike Sanders treatment which was kind of fun! 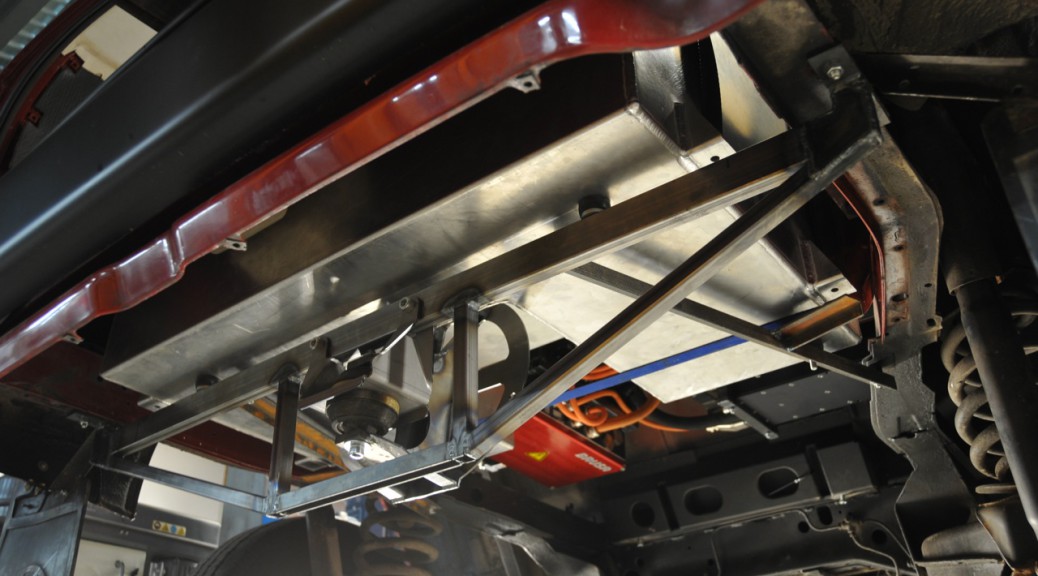 This has been a long time since the last update, sorry my dear readers. I have been working a lot on the bus in the last weeks but this has kept me from posting updates. I will make it quick and mostly just post the photos of the progress. Here we go with the completion of the rear end battery box. It contains 35 battery cells, BMS unit, dc contactors and additional electronics needed to be a fully-fledged high voltage battery box. 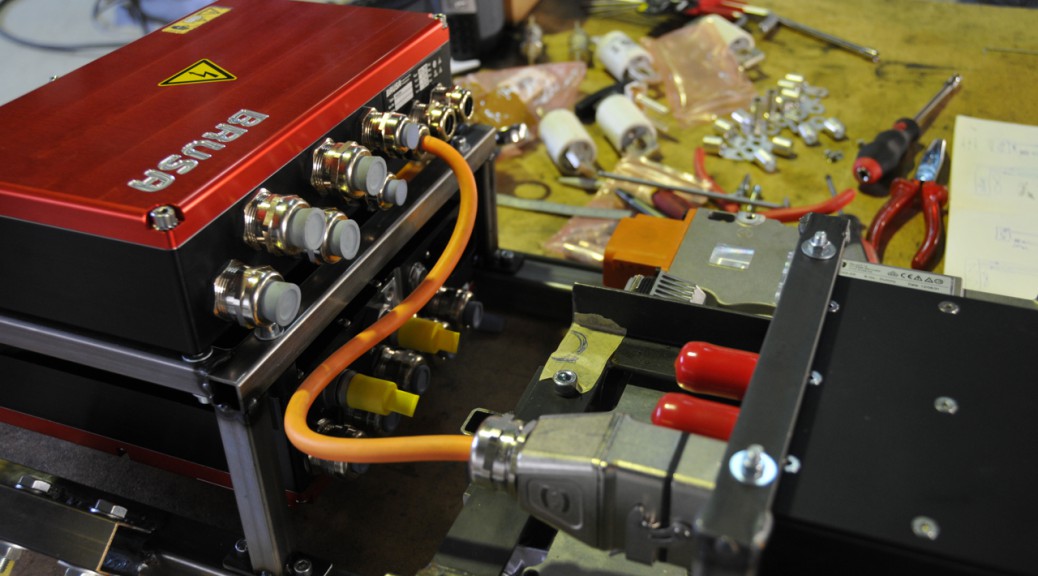 After much constructional work with the motor suspension (parts are ordered and being processed) I continued with the power electronics rack. All power electronic devices (inverter, charger, dcdc) are connected to the high voltage DC link in the so called power distribution unit (PDU). The battery brings 400VDC and it is distributed to all devices through fuses. All of the power cables are shielded to reduce EMI (electromagnetic interference) and it takes a lot of time to connect the shield correctly to the housings of the cable glands. In the meantime the DC connections from inverter, charger and DCDC to the PDU are finished. The power electronics rack is not yet finished though, what needs to be done is: water cooling tubes, signal wiring and minor metal works and painting of the frame to protect it against corrosion. But it seems like the cooling circuit is better done later when the rack is inside the car, because then I can see where there is space left for routing the tubes.

What is also left to do is the third and last battery pack. It is the one which will be sitting above the motor in the back of the car. It will contain the ‘brain’ of the battery, meaning precharge circuit, battery management central and dc contactors. I started with the placement of the devices and the internal power wiring (everything is done with 35mm^2 copper cables).

It feels now a bit like all the parts of the puzzle are joining together. It will still take a lot of work for the last parts, but there is light at the end of the tunnel! 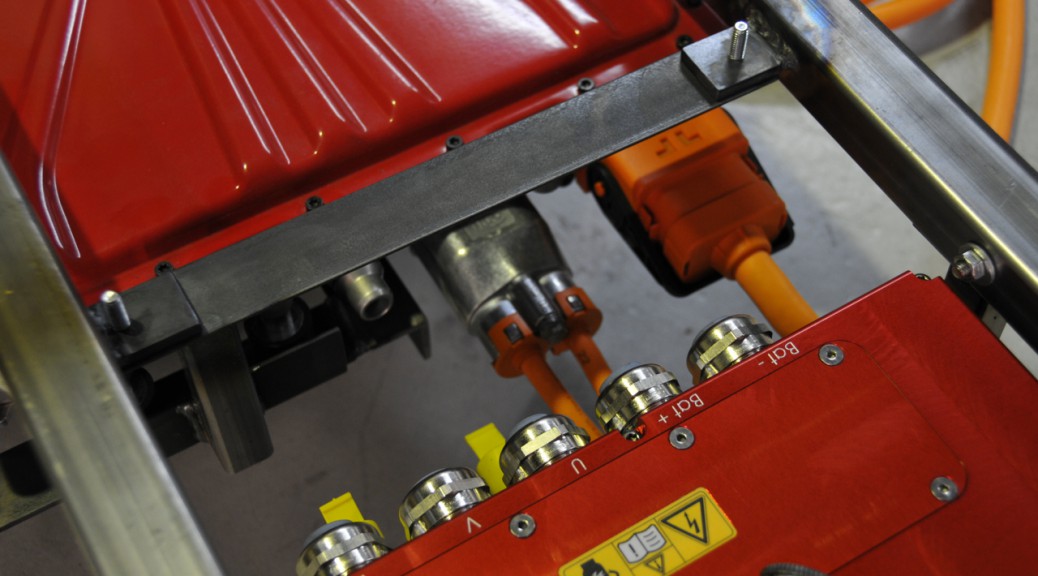 After a lot of preparation finally a lot of stuff could be done today! The goal was to put the underbody batteries up and see if now everything fits. Last time I realised that the dc power connectors of the boxes were mounted too high so that it was not possible to connect a power cable to it. This led to about one full day of corrective action. But now every thing fits fine. With the kind help of Jere we put up the underbody battery boxes this afternoon. They are attached to the chassis frame with six 12.9 (stronger steel) threaded rods each.

Behind the battery boxes the motor and gear unit are placed. With my recently aquired welding skills I welded the motor support out of a steel square tube. It is screwed to the chassis frame where the original motor support also was located. This should garantee enough stability.

Another construction site is the electronics rack. It will be mounted in the old gasoline tank compartment. We will place there all power electronics like motor inverter, charger, dcdc and additionally the power distribution unit. It seems like everything will fit in, but here also it is a task of millimeters… On the pictures you can see that there is not much space remaining between the devices (inverter and charger are screwed on the rack for testing). It always has to be taken into account that the connecting power and signal cables and plugs take a lot of space as well! 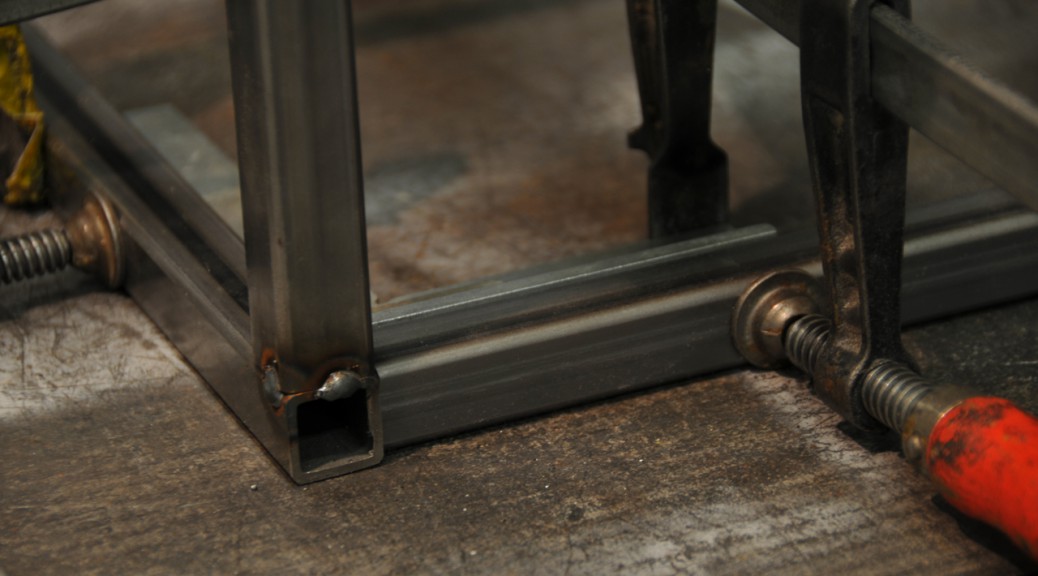 Some stuff happened since beginning of August… Marc was here for a week and together we started the construction of the steel frames which will hold the power electronics. Marc also put the drive shafts back together after cleaning them and applying new paint. For the Brusa power electronic parts, which are motor inverter (DMC524), charger (NLG644) and dcdc (BSC624) we need to construct adapter frames to hold them in position. The gear, motor and the third battery box take all the room of the original engine bay. The only remaining empty space is the place where the gasoline tank was located before which is in front of the original motor. At first it seemed to be an easy task to fit all the devices in there but when we added all the square tubs and the neccesary spacing for the water cooling and wiring between the devices the room got quite small quickly! But in the end it seems like we have found a solution to put everything in there! See the pictures below…